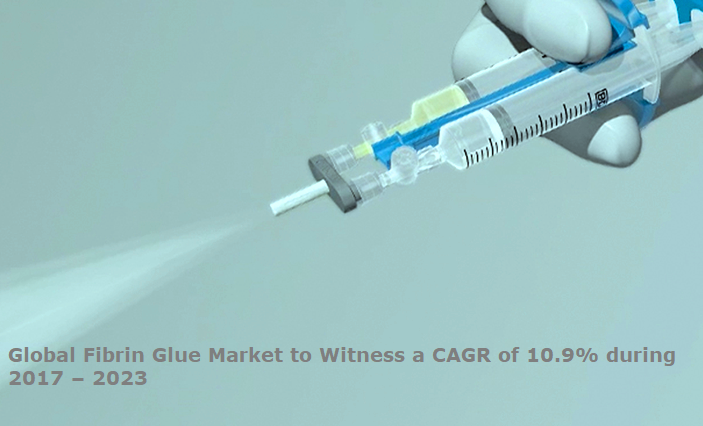 The global fibrin glue market is likely to grow significantly during the forecast period, mainly due to increasing number of surgical procedures and burn cases, and rising healthcare expenditure. According to the data provided by the World Bank, 30,537 surgeries were performed per 100,000 population, in 2012, in the U.S. Similarly, in 2015, number of surgical procedures performed in Australia were 28,907 per 100,000 population. Fibrin glue is used in various types of surgeries. Fibrin glue is also used in burn cases during plastic surgeries and surgery of the burned body parts. According to WHO, approximately 265,000 deaths every year are caused by burns. Additionally, increasing prevalence of chronic diseases and low chances of complications associated with these products and rise in the number of road accidents also contributes to the growth of the overall market. However, increasing minimally invasive procedures and stringent regulatory requirements are some of the key factors restraining the growth of global fibrin glue market.

North America has been the largest market for fibrin glue, with the U.S. being the larger contributor to the regional market, compared to Canada. High prevalence of cardiovascular diseases is a key factor driving the growth of North America fibrin glue market for cardiac surgery. Additionally, the growth of the fibrin glue market in this region is driven by the rise in number of surgical procedures; especially plastic surgeries in the region, high expenditure on healthcare, increasing geriatric population, high number of road accidents and burn cases. According to American Heart Association (AHA), around 85.6 million people are living with cardiovascular diseases, in the U.S. According to Centers for Disease Control and Prevention (CDC), total national healthcare expenditure in the U.S. was $3.0 trillion in 2014 and per capita national health expenditure was $9,523. According to the American Society of Plastic Surgeons, around 14.6 million cosmetic plastic surgeries were carried out in the U.S. in 2012, which was 5% higher as compared to 2011. According to a United Nations publication, the population of people aged 60 years and above in North America was approximately 74.6 million in 2015, and the number is estimated to reach approximately 104.8 million by 2030. Thus, the demand for fibrin glue products is expected to increase in the region.

Key player in the fibrin glue market are extensively working on indication expansion of the existing fibrin glue products to leverage full potential of their products in various indications.

All about market research update

Login to quote this blog

You cannot quote because this article is private.